It’s not terribly often that I take up a new hobby – especially one that I can easily incorporate my nerdiness into.  (Or actually encourages my nerdiness.)  However, a couple of my friends are also into this specific hobby, and it piqued my interest…

Yes, that’s right – I’ve picked up the fine (and expensive) hobby of painting minis.  And it turns out I’m actually pretty good at it, too!

When I first heard about mini figures, it was through some friends who played Warhammer 40K – that was my only exposure to minis for many, many years.  All I knew about it was that it involved lots of tiny figurines, and the game wasn’t quite my thing, so I largely ignored it.  Then a friend of mine reintroduced me to the hobby last year – it turned out minis weren’t just used for Warhammer, they were used in lots of games – like Pathfinder, Dungeons and Dragons, and more.  I admired his intricate paint work, but didn’t think I could manage such tiny details. Pony minis from Impact Miniatures, primed and ready for painting

Fast forward to last November – news was floating around on Equestria Daily about a company making pony-themed minis – and me being me, I backed the Kickstarter and chose the Pony Pack – a collection of six ponies with assorted accessories like wings, flame hooves, and even a tiny cowboy hat.  I figured if I couldn’t paint them, I’d get a friend to.  By the time I actually received the minis, I had befriended a few more people who were into painting minis, one of which actually lived close by!  I asked Michael if he would be willing to help me learn the fine arts of painting minis, and he said he would be glad to. Michael, demonstrating how to de-flash minis.

I brought my ponies, all with little plastic bits coming out of various pony limbs, and he showed me how to remove all the extra plastic crap (it’s apparently called flash) and showed me how to file all the rough parts off.  A couple weeks later, he came over with a gigantic box of minis and I got my first – well, only – lesson in painting minis.  We painted for four hours, and the only reason we stopped is because I needed to eat dinner.  I finished one mini, a lady fighter with a sword, and got partway through another (a winter witch, which I did not do nearly as good a job on) before we stopped for the day. For a first mini, she looks pretty good!  I’m especially proud of the shading.  The day after, I was itching to try my hand at painting more minis, so I asked Michael if I could borrow his paints, and got to work on some of the pony minis I got from that kickstarter.  They turned out wonderfully – and then I painted more minis.  I painted through quite a few evenings.  I’ve finished a total of five now.  I want to paint more.  MORE.  😀  I mean, I’ve always enjoyed painting – but minis are so much more fun to paint on than a blank canvas.  Painting in all the tiny details, adding the shading, seeing a character come to life as you add color – it’s wonderful.  (And strangely relaxing, losing yourself in painting.)  So yes, I have fallen down the mini-painting rabbit hole.  My first stop at GenCon on Thursday, after getting my event tickets, is to dash to the dealer’s room to find Impact Miniatures’ booth and buy some more minis to paint.  Not gonna lie.  I may buy a lot of tiny things to paint.  And that excites me. 😀

Below are some more of my finished minis, and some of those minis in action at a Pathfinder game. 😀 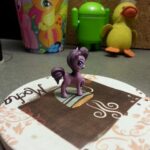 The first pony I painted – I’ve taken to calling her Epic Pie. 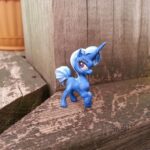 This one is Trixie the Tiny and Powerful – I’m especially proud of her paint job. 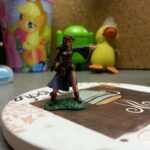 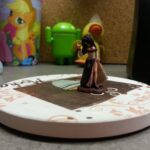 I’ve just been calling this one “the hussy”, haha. 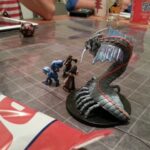 And some minis in action at our last game night!