I’m still not quite back to regular posting, thanks to NaNoWriMo eating up all my creative brain (only 11,944 words to go until I win!  Story is nowhere near over yet though), but I wanted to post a little tidbit of awesomeness here.

One of my most favorite webcomics ever is Dumbing of Age, by David Willis.  I’ve had the chance to meet him in person twice at comic book signings at my local comic book store, Vintage Phoenix, and he’s always been super friendly.  So when a recent strip gave me some inspiration to draw some fanart, I figured, why the heck not? 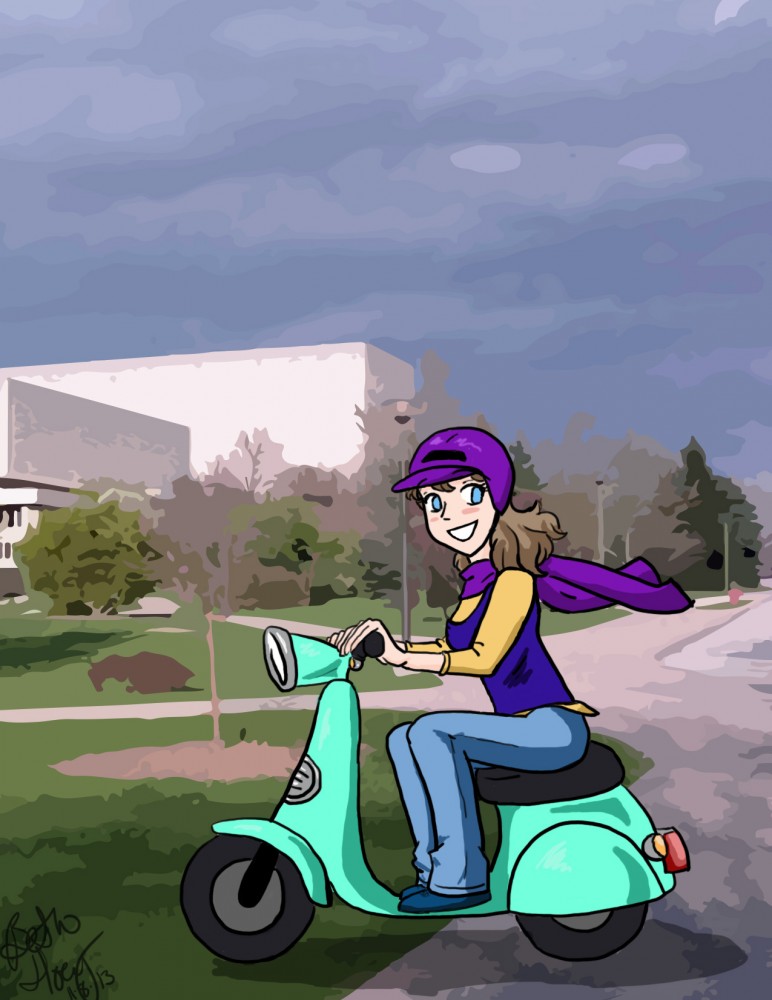 Yes, I drew Joyce, one of the comic’s main characters, on a scooter.  Driving in the grass, and being rebellious.  At least, as rebellious as Joyce can get, anyway.  I posted it to Twitter, David retweeted it, and I flailed about a bit.  Then, this past Wednesday, he was at Vintage Phoenix.  And after I flailed about and said “I WANT JOYCE IN MY BOOK” (which was much better than last year where I completely blanked on every single character’s name, and blurted out “DRAW ME SUPERHERO GIRL”), I said “I’m the one who drew Joyce on the scooter, by the way.”  And he said “Oh, that was you? Awesome!”

AND THEN HE POSTED MY FANART ON HIS SITE YESTERDAY.

And he said I’m awesome.

I love webcomic artists.  They’re a special breed of awesome, I swear.  I’ve never had a bad interaction with one.  From my all awkward-turtle purchase of Questionable Content book 1 from Jeph Jacques at GenCon (where I said “I sent my husband over here to get a sketch of Marigold earlier ’cause I was too shy to ask myself”), to my unintentional convention-stalking of Michael “Mookie” Terraciano , formerly of Dominic Deegan: Oracle for Hire fame back in 2005 (I can’t believe he remembered me from I-CON when I found him at Otacon! not to mention he let me touch the following day’s comic strip, I may have nearly died, haha), to David Willis posting my fanart… yeah.  Webcomic artists are awesome.