Well, to be completely honest, it probably never left in the first place. 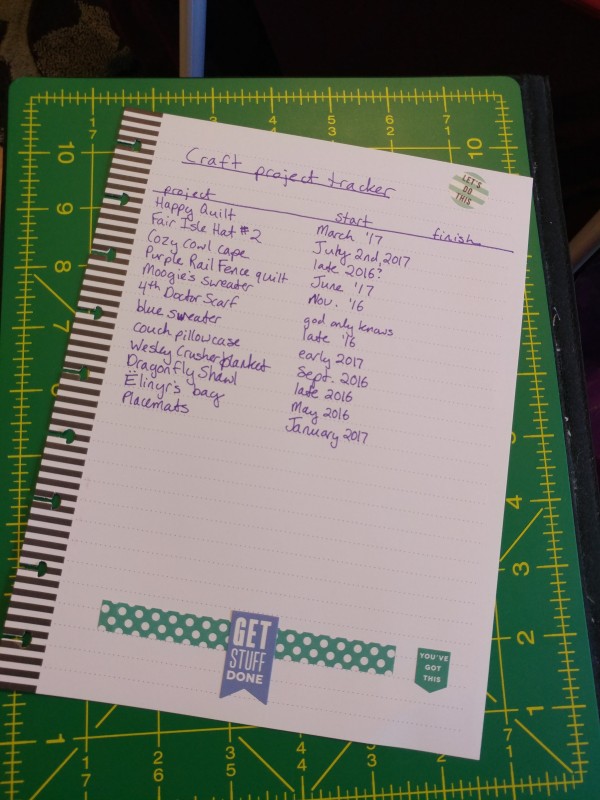 Ah, here we are again, making lists of unfinished projects…

As part of me trying to get some craft projects actually finished instead of lurking around my craft room or piled in the closet, I made a list of what I know I’ve started and haven’t finished yet.  And I gave myself an ultimatum: no spending money on craft supplies until I finish a good chunk of these projects.

This list, though, I don’t even think it’s everything I’ve got started.  There’s a cowl I made last fall that still needs to be blocked, and some random half-started shawl somewhere that I’m probably not going to finish because I’m not a fan of the yarn.  However, these were the ones that came to mind.  The Fourth Doctor scarf is the most embarrassing entry on that list – especially considering it showed up in my last Startitis post, four years ago.  I’m not even sure I actually want the scarf at this point.  Maybe I’ll finish it and give it away.  Anybody want a season 18 Fourth Doctor scarf?

And speaking of the last time I rambled about Startitis: of all the projects I highlighted in that post, do you want to know how many I actually finished?

Two.  The multicolored scarf in the first picture, and the no-sew blanket at the end.  (I used that for blog post fodder way back in the day, which was my motivation to actually get that made.)

I know why I start all these projects.  I’m constantly looking for something new and fun to do, and so I go to the yarn store, or to Jo-Ann’s, and find some yarn or fabric that I absolutely cannot live without, and buy it for a project.  Then, most of the time, I start it immediately, only to put it down a few days or weeks later when I get distracted by something else.  And don’t get me started on all the yarn or fabric I’ve bought that’s never actually materialized into a project.  (I’m on a yarn buying hiatus, too, until I make some more stuff.  Like socks.  I have far too much sock yarn for someone who’s only made two mismatched socks ever.)  I’m pretty sure it’s one of the many ways my ADHD manifests itself – me going “oooh, shiny” over some craft supplies, buying them with the best intentions, and then sometimes making things out of them.

So how am I going to deal with this?  Well, the short answer is that I need to focus. I need to find a project and focus on finishing it.  So far, it’s worked on one project – I knocked out the Wesley Crusher baby blanket over the weekend. 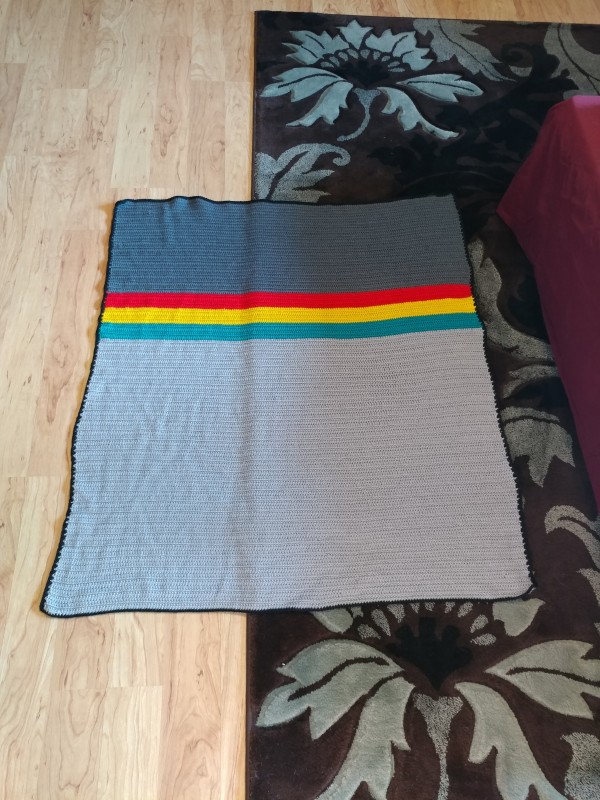 Not the most flattering picture of it, but there it is.

I told myself I wasn’t going to work on any other projects until I finished the blanket – and so I focused on that for an evening (it was way closer to done than I’d initially thought), finished it, and gave it to my friends for their little boy to snuggle with.  Next, I think I’m going to finish the Fair Isle crochet hat I started recently – while it’s small and hasn’t been a work-in-progress for very long, it’s something I’m really enjoying working on, and it’ll be nice to have something fancy to show off.

I’m hoping this “pick something and focus on it until it’s done” thing will help me get at least a few more items off my list – there are some things that are so close to done that it’s ridiculous that they’re still sitting around, not done yet.  Who knows – maybe, in a few months or sometime next year, I can revisit that list and show off all the things I managed to cross off of said list – rather than being embarrassed about having some stuff on my to-finish list for longer than four years, like that darn Doctor Who scarf.