For those of you who’ve been following the blog since I started writing early last year, it should be no surprise to you that three-quarters of the year, I’m up to my nose in school work, earning my Masters degrees in Information and Library Science.  (And yes, that’s right, two degrees – I added the Library Science degree on at the end of the spring semester last year.)  And as most of you know, I try my hardest to work my nerdiness into, well, everything I can.  You’ve seen my cube in my office building, covered in My Little Ponies.  You saw Scooterlou with her yarn-covered wire basket.  (And I saw Scooterlou recently – and she still has her basket cozy attached!  A fellow crafter bought her, and is considering sewing beads onto her cozy, but I digress!)  So, it should come as no surprise that I’ve managed to work my nerdiness into my graduate work – and that it’s come effortlessly, too.

One of my professors (and my academic advisor), Dr. John Walsh, is a comic book fan.  A large one.  There’s a big chunk of his office dedicated to action figures.  He’s even created a markup language entirely dedicated to comic books: Comic Book Markup Language.  I learned about CBML during the Digital Humanities class I took with Dr. Walsh last semester, and of course got very, very excited about it – in fact, so excited that I delivered a presentation on it for one of the presentations we had to do.  In short, CBML is an extension of the Text Encoding Initiative guidelines that gives digital librarians and archivists a markup language that’s more appropriate for documents that combine both text and graphics on a page – like comic books, for which the markup language is named.  You can use it with the TEI guidelines to mark up an entire comic book – sound effects, scenes, advertisements, news, and fan mail.  (If you’re interested in learning a little more about CBML, you can either check out my presentation from Digital Humanities last semester, or you can read this article by Dr. Walsh from Digital Humanities Quarterly.) 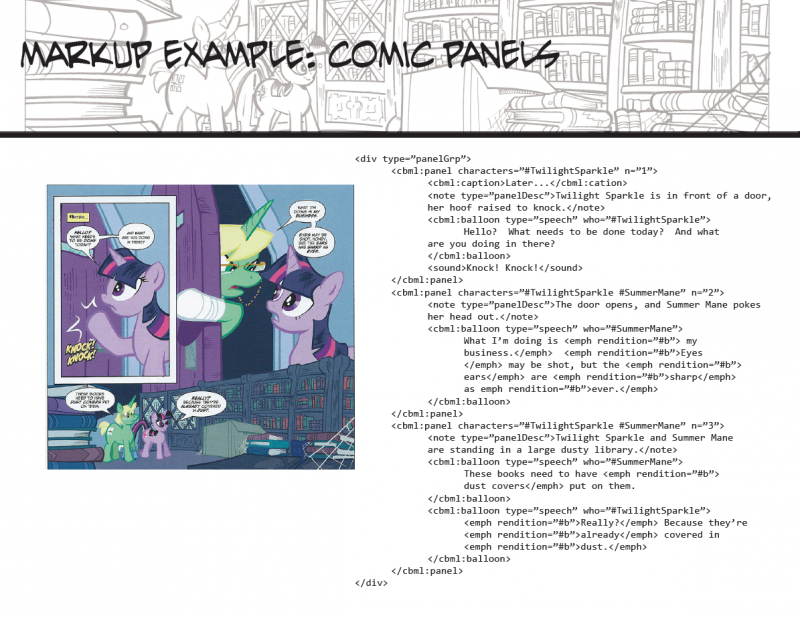 Part of my presentation from last semester: a snippet of a page from the Twilight Sparkle issue from the My Little Pony comic micro-series, all marked up. You can see a scan of the original inked page in the background of the header – I actually own that page!

One thing that I noticed while doing my research on CBML for last semester’s presentation is that aside from a few snippets in the Digital Humanities Quarterly article, and from some examples on the CBML page itself, there’s not really any large-scale projects using CBML out there for people who are interested in seeing exactly how it works, and how an entire page from a comic book may look when it’s completely marked up.  I talked to Dr. Walsh, and asked if he’d mind if I started putting together some examples of CBML so others could see how it looks when it’s in use for existing comic book pages, and maybe build up a small repository of comics.  He said it sounded like a great idea, and while it’s been off to a slow start (moving got in the way, and then sorting out a schedule for the new semester), I’m currently working my way through marking up the first issue of Captain Marvel Adventures.  And once I have that put together, I hope to put together a small website where people can actually view the marked up pages, and download the XML files that are working behind the scenes to display images and text together.

I plan on documenting the process as I go along – and what better place to talk about it than here, on The Crafty Nerd?  After all, marking up pages from a comic book feels partly like assembling a craft project – you look at the page, and assemble the markup pieces to build the textual version of the graphical page.  And, come on, we’re working with comic books here.  This project will be right at home here. (And besides, I’m not quite sure if I want to start a third blog just for this project, unless it really takes off and becomes something huge.)  I hope to post something here every few weeks about the progress I’m making, and even show some of the work I’ve done!  And if any of this sounds of interest to any of you, my readers, feel free to get in touch with me – I’d be happy to ramble on about CBML with you.