There is one thing I can definitely say about the My Little Pony community – they are INCREDIBLY friendly people. 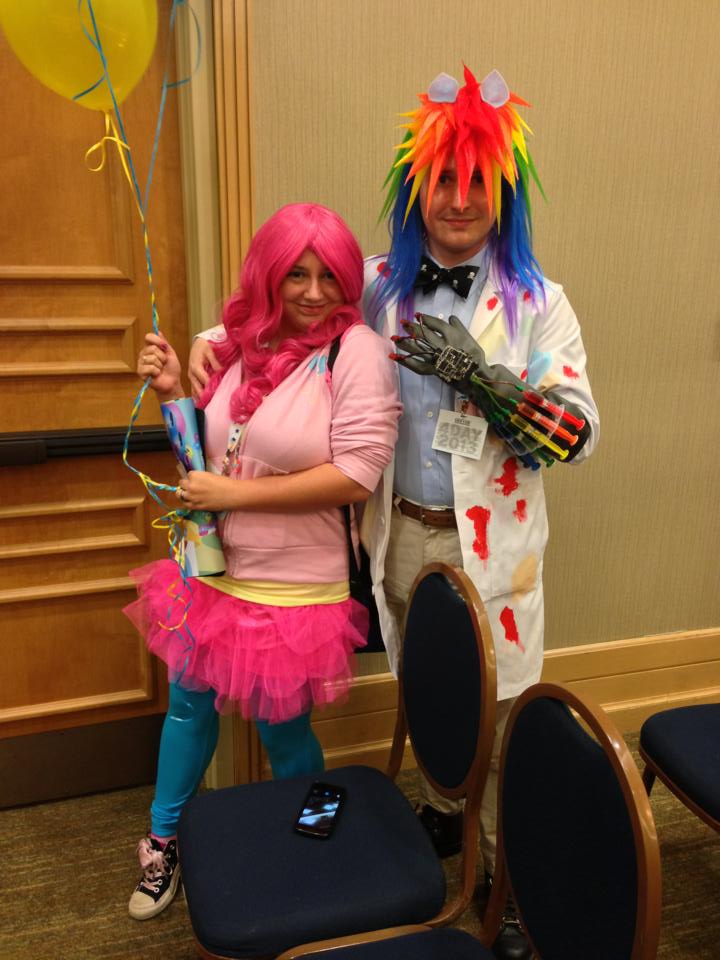 Like Rainbow Factory Dash, who started to laugh every time we ran into each other.

I’ve never noticed this so much as I did at GenCon this year.  Now, as I’m sure most of you who know me know, or those of you who’ve been reading the blog for any length of time know, I deal with anxiety and a heck of a lot of social awkwardness.  And because of that, it’s hard for me to just strike up a conversation with people, especially random people I’ve never met that I’m chasing down to take their picture.  (More often than not, by the time I worked up the nerve to ask someone for their picture, they’d wandered too far away – thank goodness for Mister Crafty Nerd hunting them down for me and snagging them for pictures!)  Or random people I meet in panels.  I mean, if there’s a My Little Pony community here in Bloomington, I sure haven’t found it – and even if I did, I’d be a little nervous to just jump right in, hollering “OMG PONIES!”  But the My Little Pony fans (or bronies, as I’ll call them for short – I know not everyone identifies as a brony, but it’s just quicker than saying My Little Pony fans every time I want to refer to the group as a whole, heh) at GenCon were just so welcoming and friendly and easy to talk to.  I found this out in both of the Enterplay My Little Pony: Collectible Card Game panels I went to, as well as in my wanderings around the con.  (One of those Enterplay panels was supposed to be My Little Pony: This Panel is MAGIC, but it got rescheduled…)  People commented on how awesome my costume was, and there were a few people who I recognized from when they took my picture earlier in the day.  And a magical thing happened – I actually started to talk to people.  People I didn’t know.  It was amazing.

Immediately surrounding me at the first MLP:CCG panel I went to were a bunch of older guys, and a couple of younger girls and their moms who seemed to enjoy the show as much as their kids did.  And we all talked.  We discussed our favorite episodes, I showed off pictures of my ridiculous collection of My Little Pony plush, we talked about who our favorite ponies were, and wondered what the collectible card game would be like.  It was like we were all old friends – and the fact that it was My Little Pony that brought us all together made it even more awesome.