For those of you who haven’t been following the Facebook page, or who haven’t had to put up with me in person the past couple of days, I’ve been sick.  Not super sick, not “oh crap I should go to urgent care” sick, but sick enough to be whiny and spaced-out.  BUT.  I know my loyal readers are looking for something, anything, to read – so, I give you the story of my new scooter – mostly told in photos. 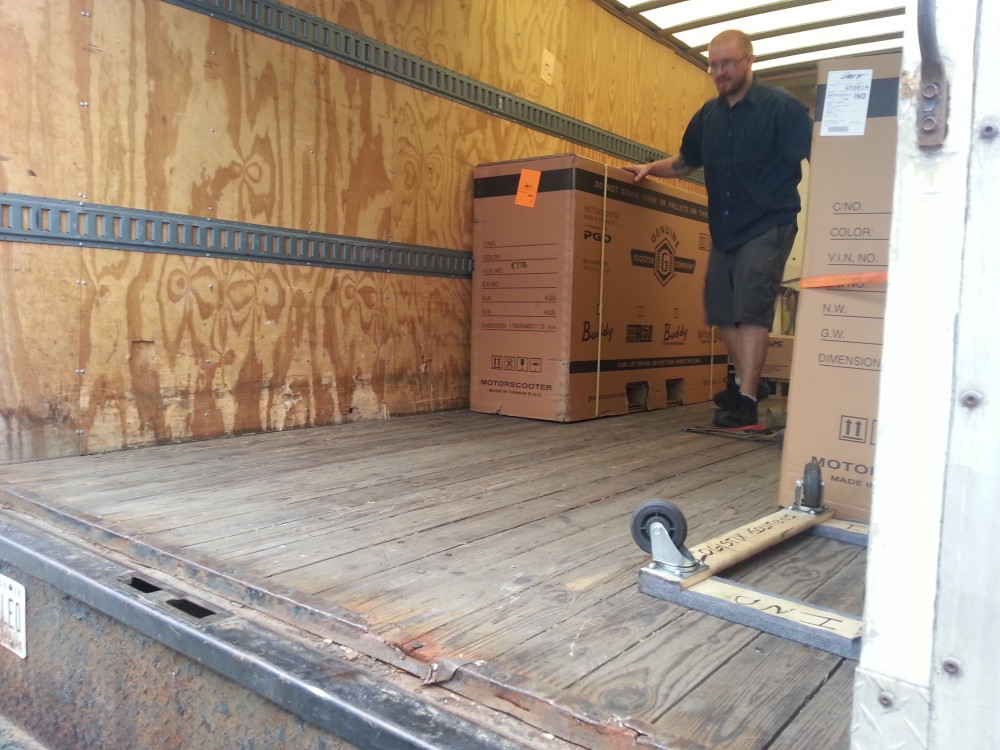 Hey, look, it’s the scooter truck!  I wonder what could be in those giant boxes that say Genuine Scooter Company on them. 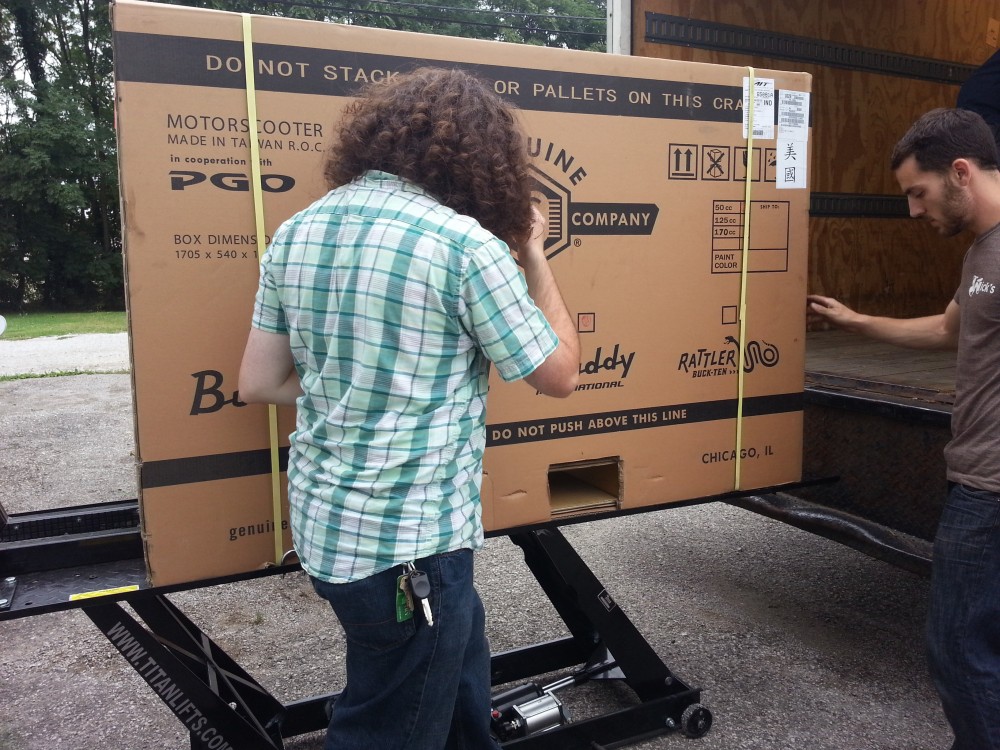 Guess we’ll just have to get it down and look, huh? 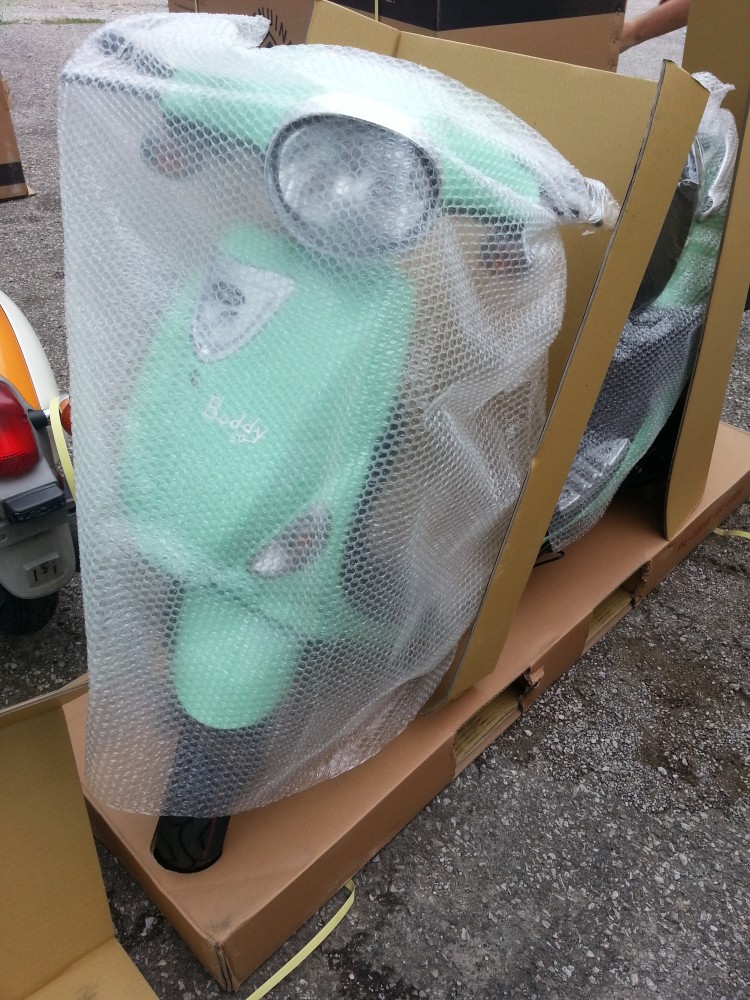 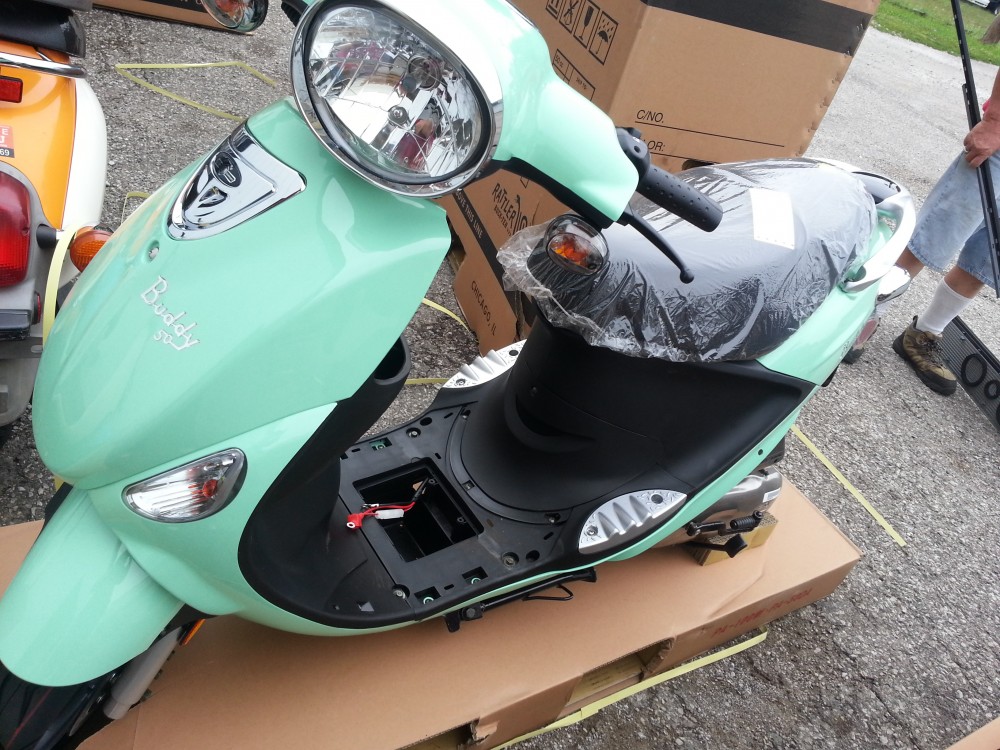 There she is, all unwrapped, still partly boxed.  I have no idea what her name is, just that she’s a girl. 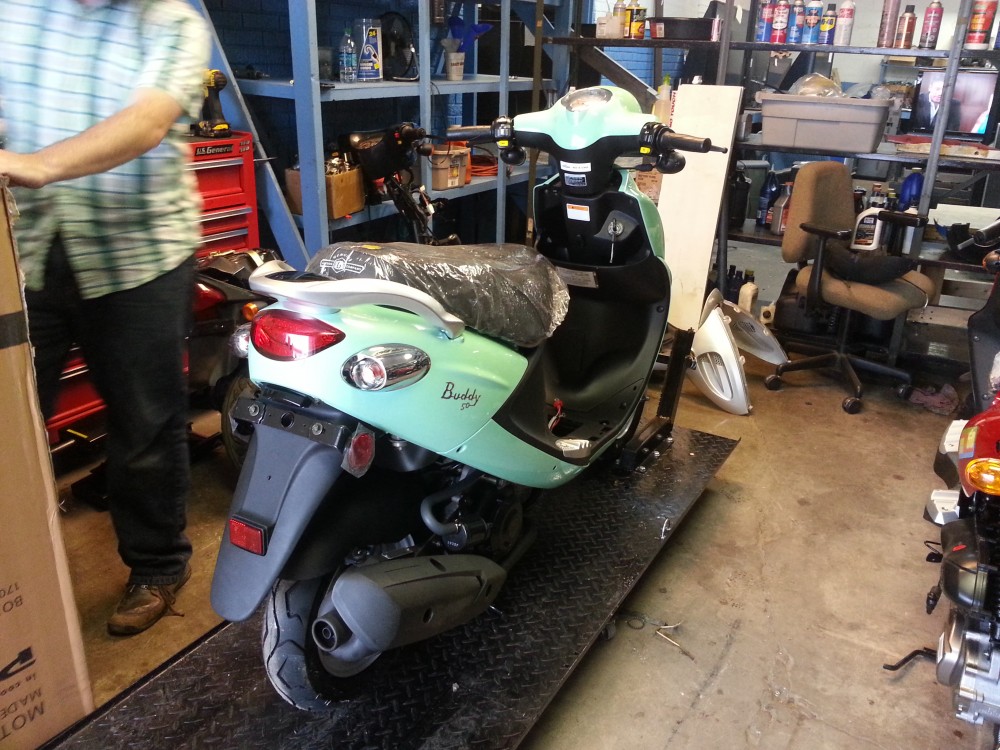 And there she is, ready for her initial service-y stuff.  Making sure there’s fresh oil in there, checking other stuff, et cetera. 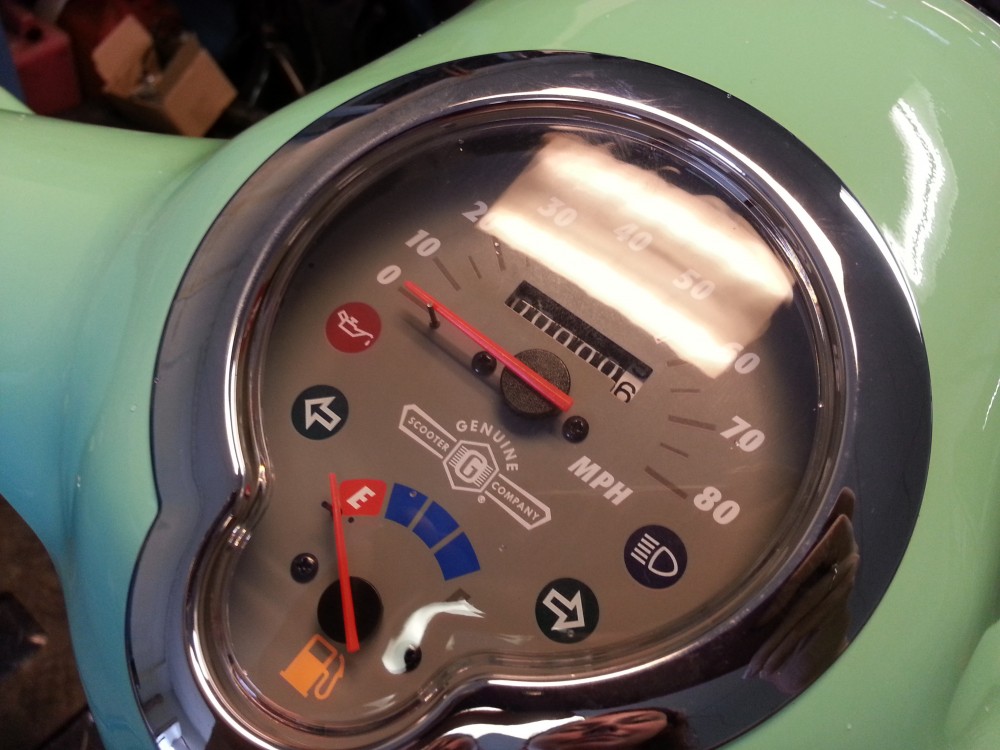 She only had .6 miles on her at this point!  That’s even less than Scooterlou had when I bought her!  (‘Lou had a whopping 2 miles on her when I decided to bring her home.) 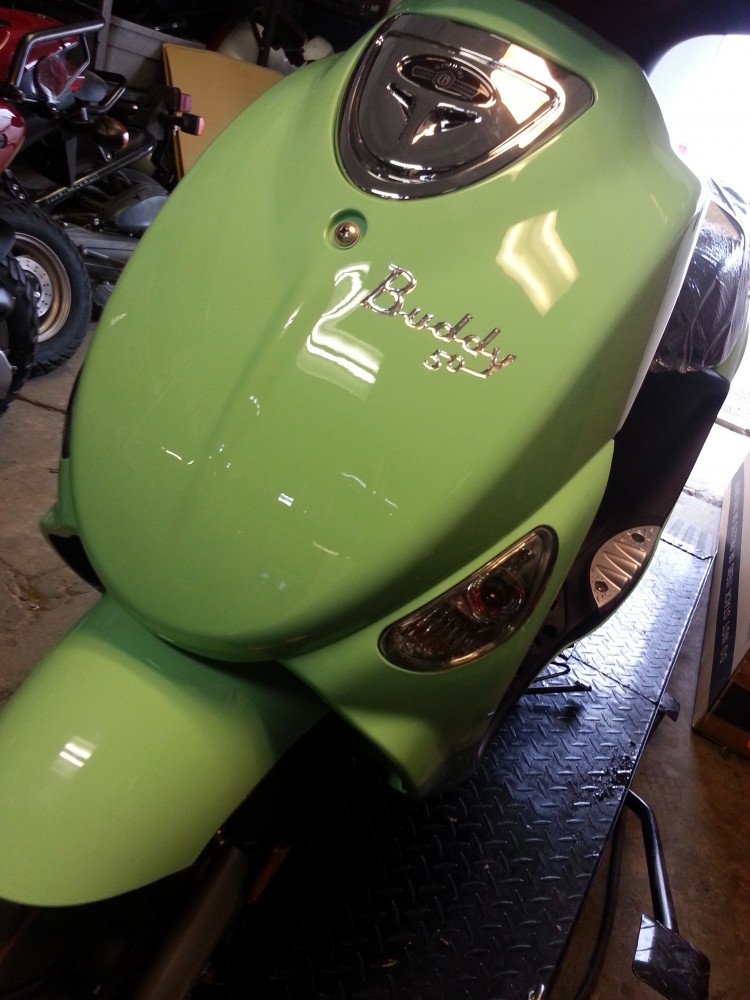 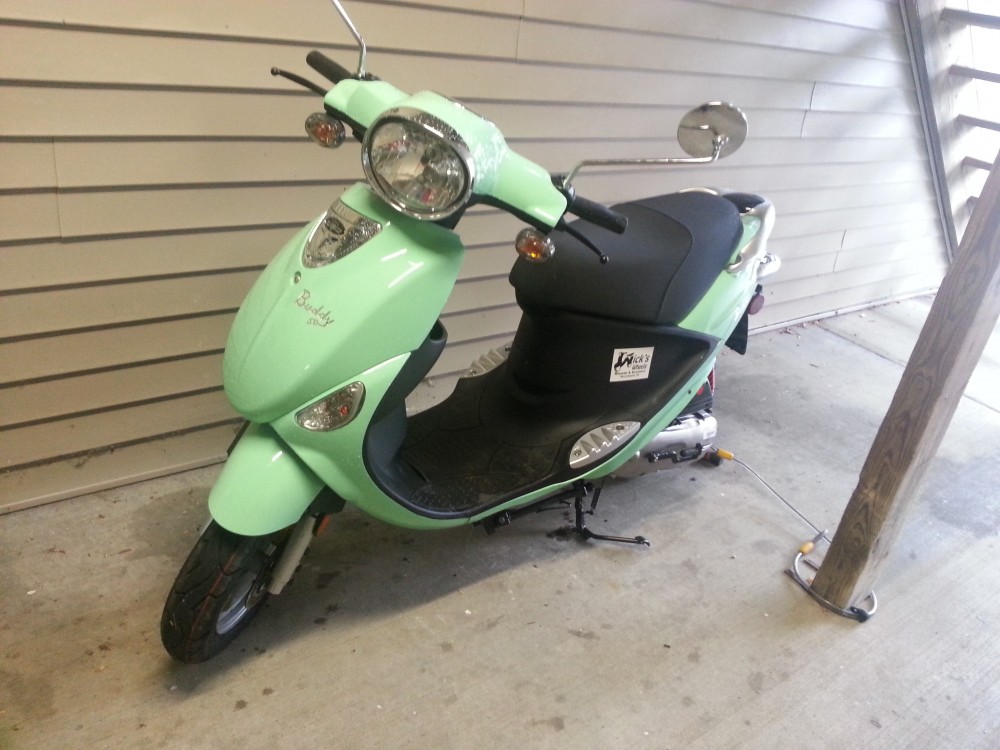 And there she is, at home sweet home, bedecked with a Wick’s Wheels sticker.  On the way home, she told me her name was Mia Lou.  (I had originally planned on calling her Vanellope Scooterlou Von Scoot, but when she came out of the box I took one look at her and said “no way, that’s not her name”)  In the week I’ve owned her, she’s also been called Miamia, Mia Mia Scooterina, Lady Putt-Puttersons, and Scooterbutt. 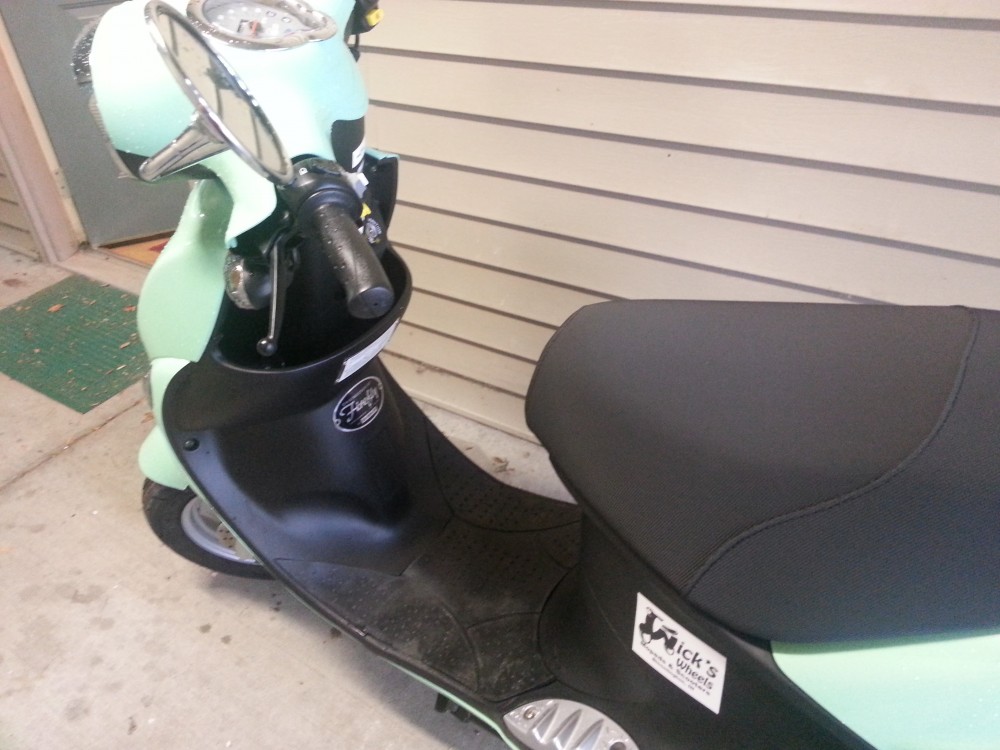 Yup, even attempted to transplant Scooterlou’s Engineered by Firefly sticker onto her.  Didn’t quite work so well, as the adhesive was all “eh, I’m not gonna stick”.  Her new one should hopefully be here today… 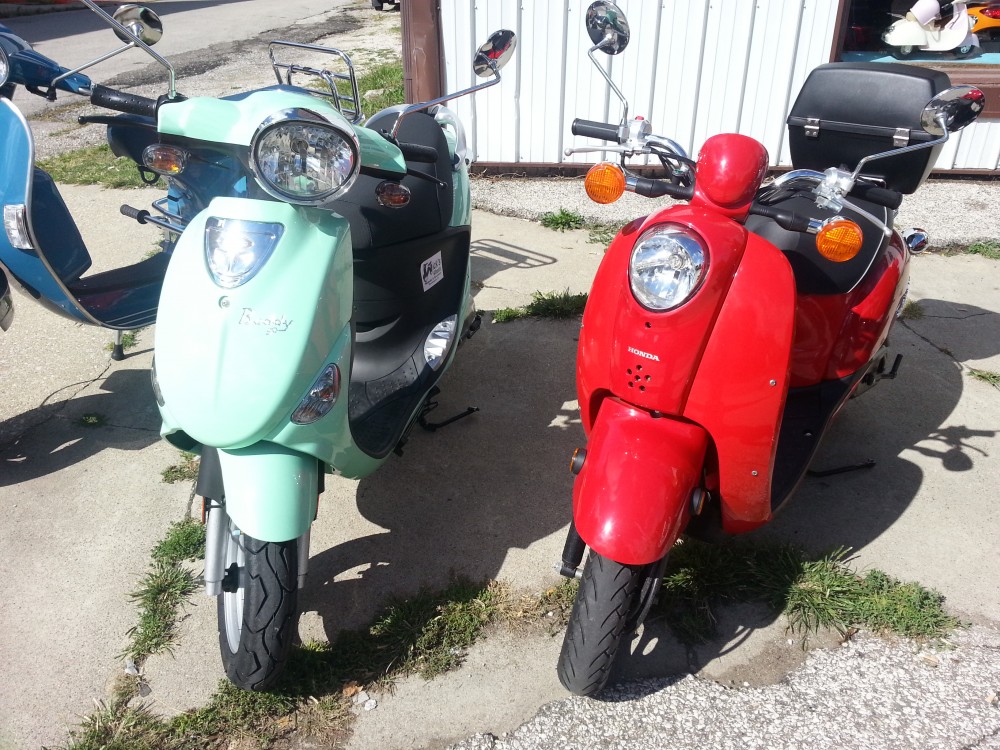 And speaking of Scooterlou, I got one shot of the two of them together, before Scooterlou got snatched up by someone else.  (I do say, Mia and Scooterlou look nice together.)  In the back, Donna Stella (Bryan’s scooter) is trying to photobomb the shot…

So, that’s the story of my new scooter.  I got to take her off the truck, watch her get made ready to ride, and then even got to take pictures of her with my old scoot.  I am absolutely in love with Mia Lou – I put more miles on her in the first week of owning her than I think I put on Scooterlou during her first two months!  I’m glad I got Mia.  Now, to figure out ways to cover her in yarn…

Oh, and one bonus picture: Mia Lou and her big “sister” Pepita la Scoot, my friend Mary Alice’s scooter.  (I say big sister because Pepita’s a 2013 buddy, and Miamia is a 2014 – so shiny new) 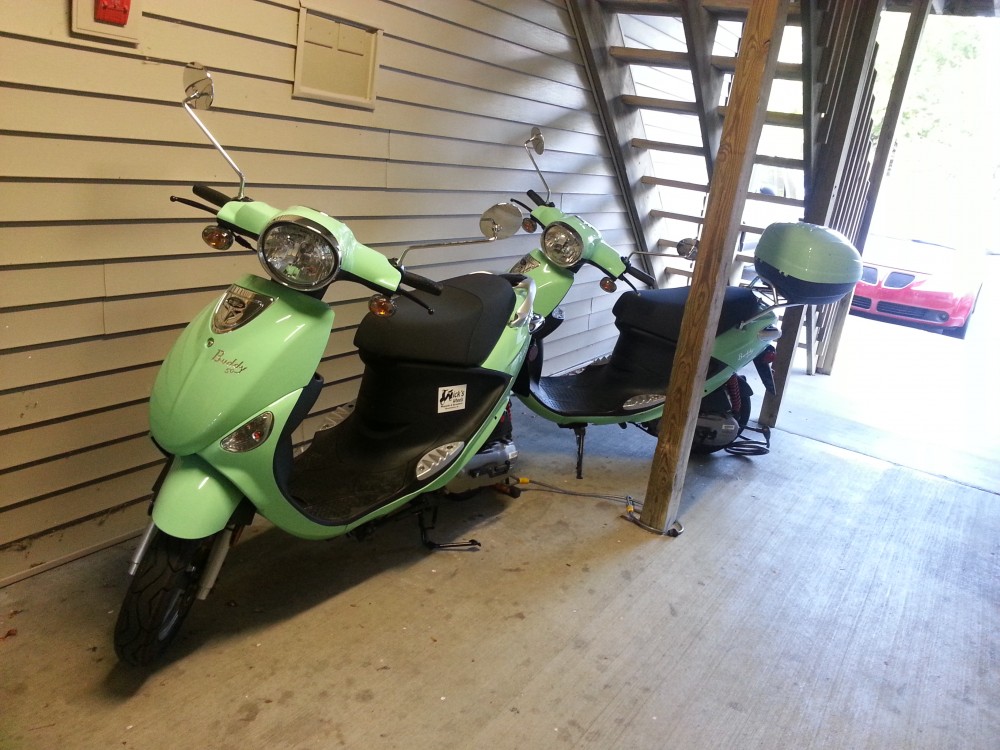