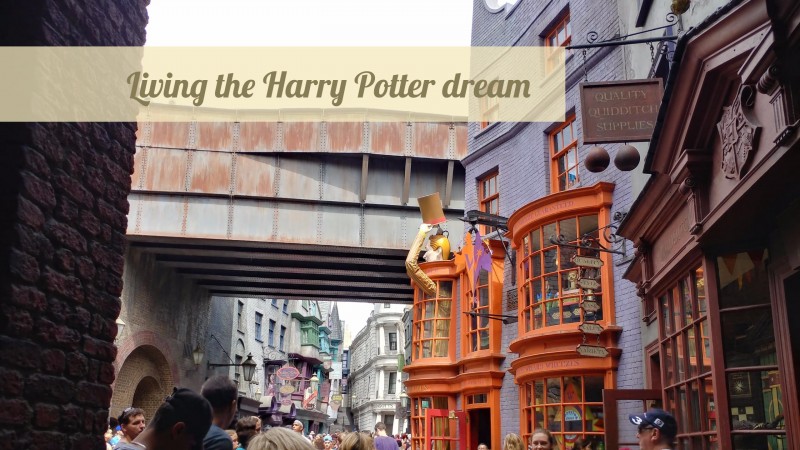 One of my earliest entries into the world of fantasy novels was the Harry Potter books.  (The other was Melanie Rawn’s Dragon Prince series, which ties into this little story…) I remember trying to find something to read one day (mom had told me I was forbidden to read the Dragon Prince series, because there was a dragon on the cover, I’m not even kidding), with a huge limitation – “NO DRAGONS on the cover, they’re associated with the devil!  And none of that fantasy crap!”  I scoured the bookshelf in the room I shared with my sister, trying to find something remotely fantasy-related, as I’d been bitten by the fantasy bug hard and my seventeen-year-old self wanted to lose myself in a world of magic and mysterious creatures.

My eyes widened when I came across a new-looking copy of the first Harry Potter book.  I don’t remember when we got it, and I don’t think it’d even been opened at that point.  I looked at the front cover leaf, determined it was about wizards, and thought to myself, “hah – I can’t read a fantasy novel with dragons on the cover, but this one has a WIZARD.  And mom must have bought it, since it’s here on the bookshelf, so I’m gonna read it!”

I am so very glad I did.  I identified so very much with Harry, the boy living under the stairs at 4 Privet Drive.  (I don’t mention it much, but my childhood and teenagerhood were… less than stellar, we’ll put it at that.)  I wanted so very much to be part of that world, to get my Hogwarts letter and live in such a magical world.  I tore through the first book in a weekend, and then signed out Chamber of Secrets and Prisoner of Azkaban from my school library on Monday.  (I think Prisoner of Azkaban had just come out – the Harry Potter books weren’t hugely popular at my high school.  Yet.)  When finishing Prisoner of Azkaban, I was slightly bummed out that I’d hit the end of the story, and had no idea if there would be more books.  I was pleasantly surprised the next summer when Goblet of Fire came out, and despite working super-full-time as a resident camp counselor, I was able to read the book in an entire week.  I’d been lucky enough to borrow it from a camper who’d just finished it, and she said I could borrow it as long as I got it back to her at the end of the week.  I stayed up into the wee hours of the morning all week, reading voraciously, and read every free moment I could so I could finish the book.  It was gripping, and I found myself quietly crying in my bunk as Cedric Diggory was killed.  That book was the first one that really hit me in the feels, so to speak.

When books five, six, and seven came out, I pre-ordered them and got them the day they came out.  I took the day off work when Order of the Phoenix came out, and read it in an entire day, sprawled out on a blanket in my backyard.  (I think it took me nine hours.)  I was unemployed when Half-Blood Prince came out, and tore through that in 7 hours, sobbing through the end of the book after Dumbledore’s death.  And when Deathly Hallows came out, I again took the day off work and spent the day reading.  I was back in college at this point, and a close friend of mine from high school who witnessed the start of my love for Harry Potter was visiting me – he sat there, patiently playing Legend of Zelda: Link to the Past while I spent eight hours reading the book, waiting for me to finish.

When I finished Deathly Hallows, it hit me – a series that I’d been following for nearly ten years, that helped me through some very rough times in my life, was over.  And I’m sure many of my fellow Harry Potter fans felt the same way when finishing the book – overcome with a strange sense of finality, and realizing that, as far as we knew, the story was done.

That didn’t diminish my love for Harry Potter.  I re-read the books.  I saw each and every movie when it came out.  I bought ridiculous amounts of merchandise.  I dressed up as Harry for Halloween as an adult, haha.  Harry Potter holds a rather large and continuing spot in my life.

Ross also loves Harry Potter, although his path to Potterdom is a little different than mine.  He discovered the books around the same time I did, and read the first three or four but never finished the series for some reason.  When he took the Sorting Hat test on Pottermore recenly, and got sorted into Ravenclaw and said “wait, that’s a house?  I thought there were only three!”, he realized it was time to read through the entire series.  As he read, we realized that we could actually go to The Wizarding World of Harry Potter when we went to Florida this year – and as Ross read through the series, and as the time got closer to our Florida trip, we got more and more excited.

And then this past Tuesday rolled around, and it was Harry Potter day. 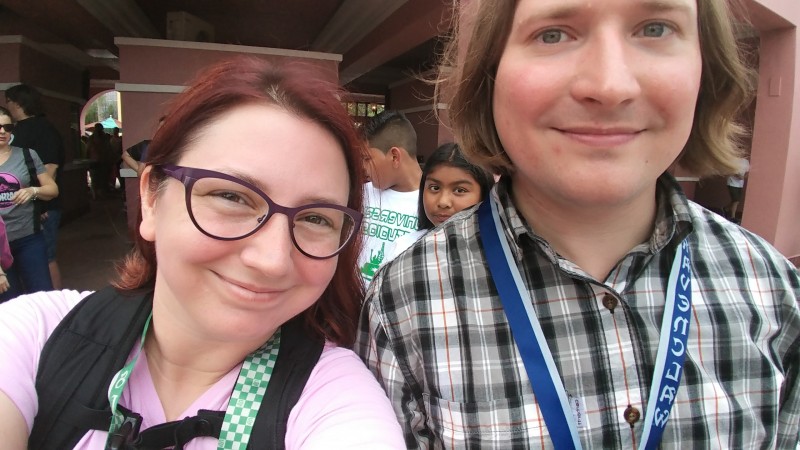 We were both incredibly excited to be there, even though the lines to get into Universal Studios were long and crept along at a snail’s pace.  Once we got into the park, we made a beeline towards Diagon Alley.  The entrance wasn’t incredibly obvious, of course, and I almost missed it entirely… 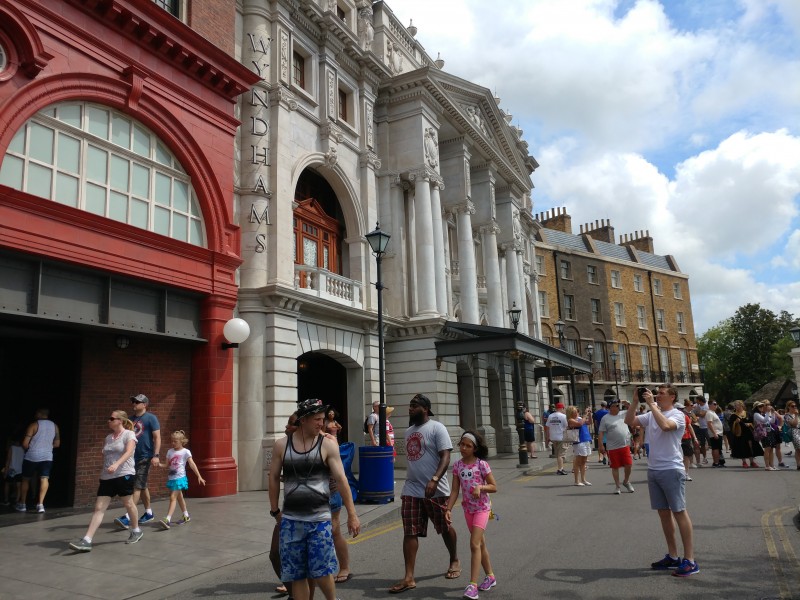 The entrance to Diagon Alley was in the second building from the left of the photo – I never would’ve guessed if Ross hadn’t made a beeline for it.

Once we went through the entrance, it felt like we’d been transported to an entirely different world… 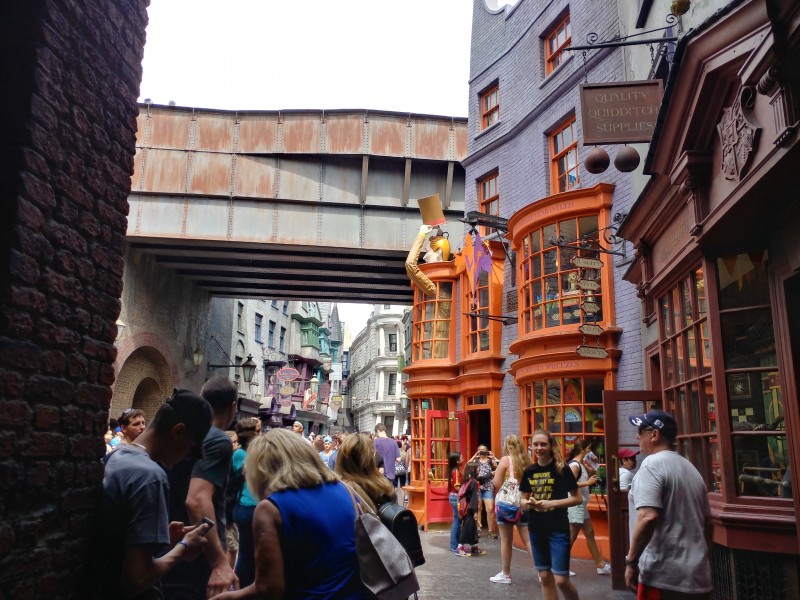 My first glimpse of Diagon Alley – it was truly magical.

I was so surprised at the level of detail everything was created with – even the stores that weren’t actually storefronts were full of fun things that tied into real places in Diagon Alley.  It was like we’d literally stepped out of Florida and into the wizarding world in England. 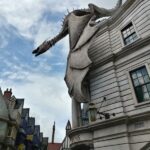 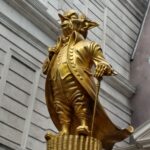 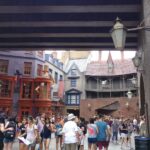 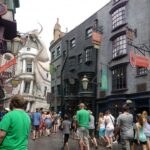 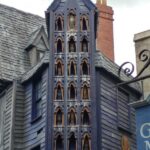 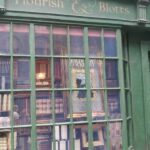 One of the nice touches about Diagon Alley here were the interactive wands you could purchase from Ollivander’s – there was an impressive selection of character wands, or you could select your own unique wand.  Ross and I opted for the unique ones, considering they were unique (we had to have our very own wands!) and they also had the interactive technology in them.  At certain parts around the park, you could cast spells and magical things would happen – at one location, you could use magic to have a little frog fountain spit water, and another one had you using magic to start a tiny puppet show.  I wish I’d thought to get pictures of the places where you could work magic.  It was wonderful, seeing kids and adults alike waving their wands and making magic! 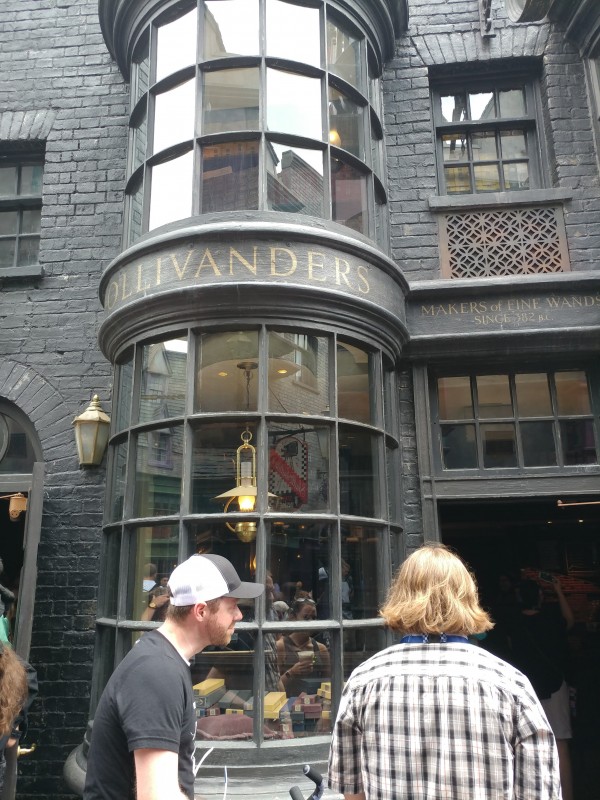 Speaking of wands, shopping in Ollivander’s was an experience, even though we didn’t watch the wand ceremony we still had the joy of having our wands choose us – I picked up the same wand three times, after setting it down and shuffling through other wands, and so I figured it was destiny.  Ross ended up falling in love with the first wand he chose. 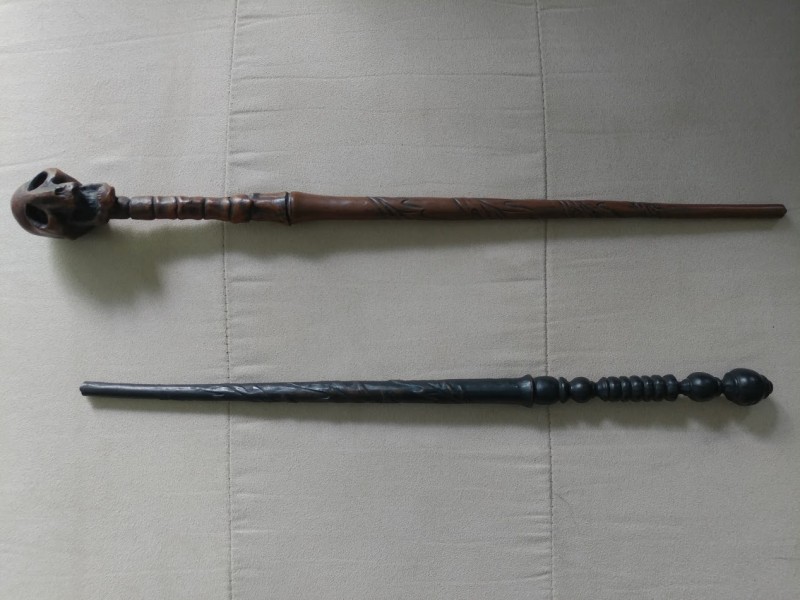 Ross’s wand is on top, and mine’s on the bottom. I had to go hunting for Ross’ wand – he had it on his bedside table, aww.

After getting wands, we waffled a bit about getting robes as well, and realized “hey, we can totally wear these to Gen Con” – and after getting some food, we went back and bought our robes. 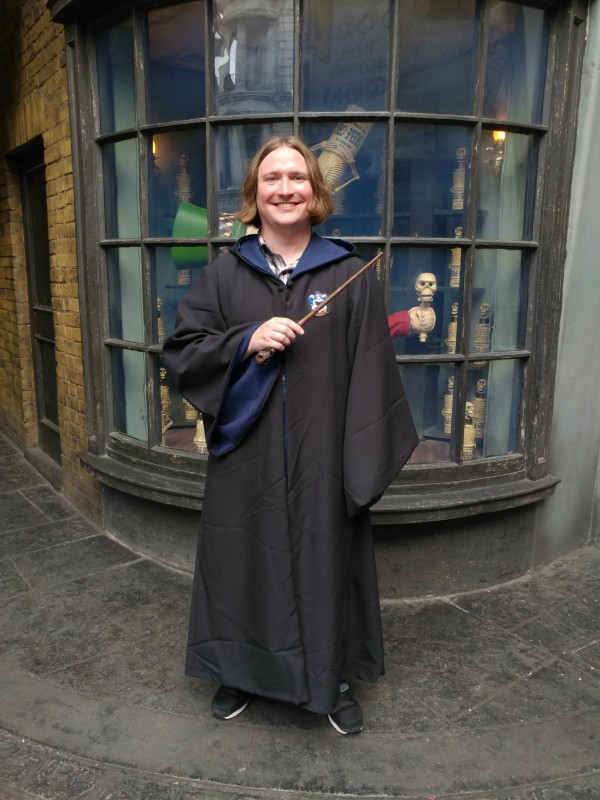 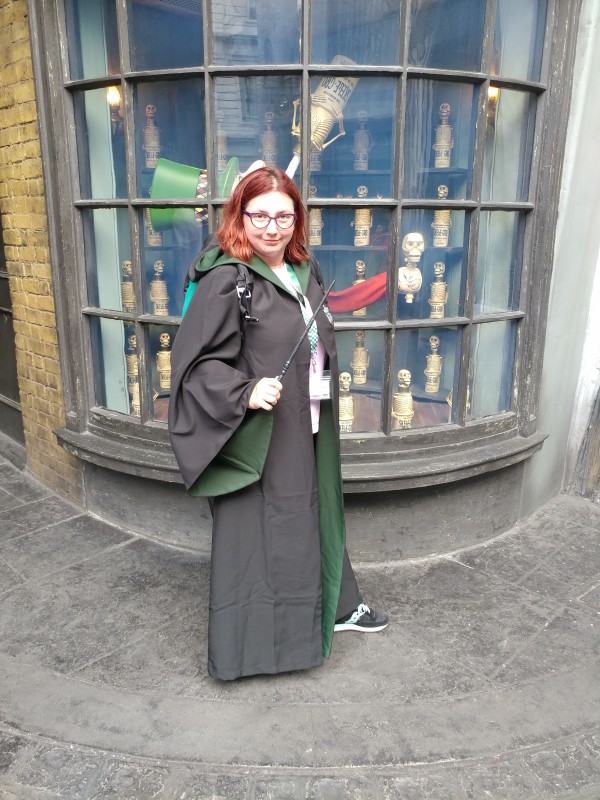 And yes, I’m wearing Slytherin robes.  Pottermore sorted me there, and I’m pretty sure the Sorting Hat knows best.  Besides, all Slytherins aren’t bad – I mean, come on, Merlin was a Slytherin, apparently.   Once we got our robes (which even have wand pockets!), we really felt like we were in Diagon Alley, and actually a part of the wizarding world.  It was absolutely amazing – to be honest, it fulfilled a long-time dream of mine.  We honestly spent the entire day there, looking through every store, trying out every spell, and exploring every nook and cranny – even Knocturn Alley. 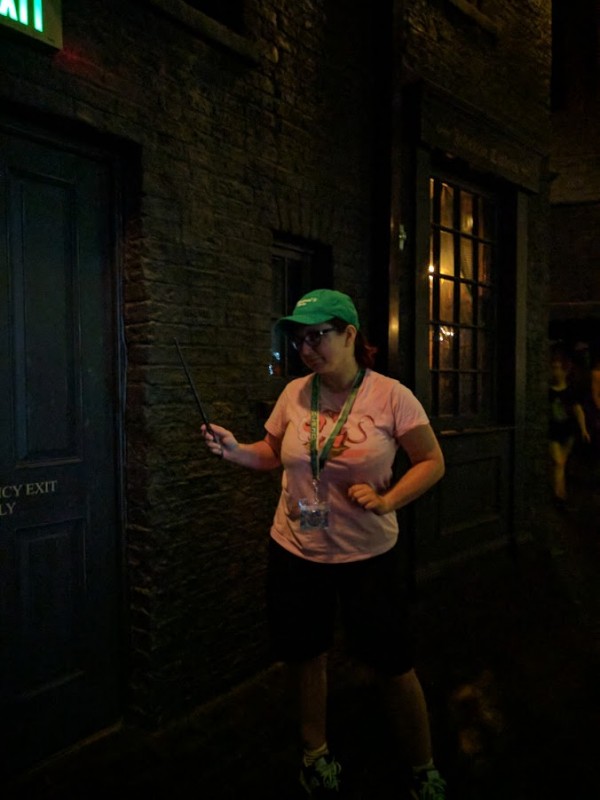 Looking out for anything unpleasant lurking in the darkness…

All in all, we had an amazing day – it’s definitely one I won’t forget, that’s for sure.  Given the impact that Harry Potter has had on multiple generations of kids at this point, I think The Wizarding World of Harry Potter will likely stick around for a while – I certainly hope so, as Ross and I are going to explore Hogsmeade next time we go to Florida.  Visiting Diagon Alley was amazing – one might even say it was magical. 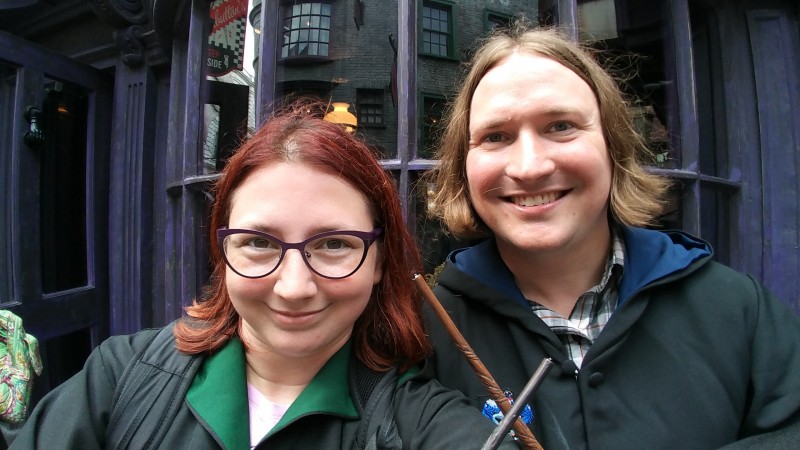